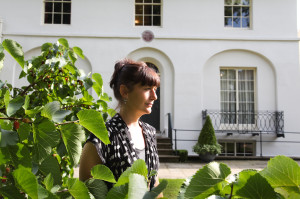 Martina Evans is an Irish poet, novelist and teacher. She grew up in County Cork in a country pub, shop and petrol station and is the youngest of ten children.

She is the author of twelve books of prose and poetry. Her first novel, Midnight Feast, won a Betty Trask Award in 1995 and her third novel, No Drinking No Dancing No Doctors (Bloomsbury, 2000), won an Arts Council England Award in 1999. Martina’s fourth poetry collection, Facing the Public was published by Anvil Press in September 2009 and has won bursary awards from both the Irish Arts Council (An Chomhairle Eiraíon) and Arts Council England. Facing the Public was a TLS Book of the Year in 2009 and won the Premio Ciampi International Prize for Poetry in 2011. Petrol, a prose poem won a Grants for the Arts Award in 2010 and was published by Anvil Press in 2012.  A revised edition of Midnight Feast and Through The Glass Mountain, a new prose poem, were published by Bloom Books in June 2013. Burnfort, Las Vegas ( Anvil Press 2014) was shortlisted for the Irish Times Poetry Now Award 2015. Mountainy Men, a new narrative poem, was the recipient of a Grants for the Arts Award in 2015 and Watch, a pamphlet, published by Rack Press in January 2016 was a Poetry Society Book Choice. The Windows of Graceland, New & Selected Poems was published by Carcanet in May 2016. Now We Can Talk Openly About Men was published by Carcanet in May 2018. It featured in the Times Literary Supplement, Observer and Irish Times Books of the Year and has been shortlisted for the 2019 Irish Times Poetry Now Award as well as the Pigott Poetry Award. Her latest collection American Mules (Carcanet 2021) won the Pigott Poetry Prize 2022 and was a TLS and Sunday Independent Book of the Year.

Martina has been Royal Literary Fund Fellow at Queen Mary, University of London from 2003-2007 and again in 2011-2012. She has run workshops in Ireland, UK, Switzerland and the U.S.. and seminars at London Metropolitan University, The National Film & Television School and Goldsmiths. She has been an associate lecturer in Creative Writing at Birkbeck University and University of East London and a Creative Writing tutor at the City Literary Institute, Covent Garden, London for many years.

Currently she is Books Critic for the Irish Times.